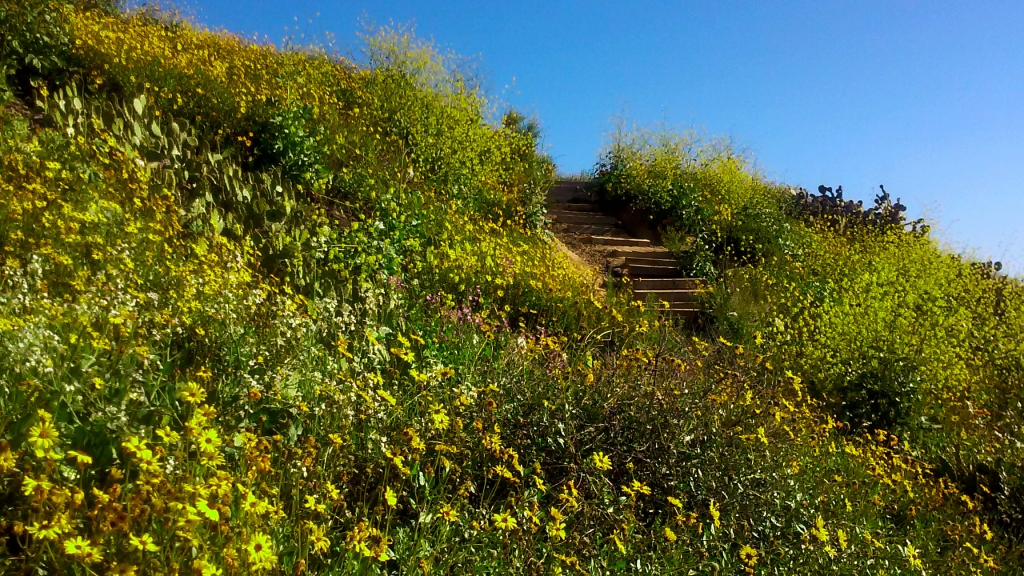 Super blooms are everywhere! The southern California hills, valleys and deserts are filled to the brim with beautiful flowers dotting the landscape. The eyes can’t help but drink-in the spectacular colors wherever the wildflowers, desert native plants and even weeds have decided to open their blooms. Bright yellows! Deep oranges! Delicious pinks! Luscious whites! Pretty purples! Spring has sprung, exposing her belly-full of magic, where flowers entice and enchant the insect world to a colorful mating dance with petals and pollen. As a company that designs with flowering plants, Plantscapers is excited to see local landscapes fill up with blooms.

WHAT IS A SUPER BLOOM?

This year has been a booty year for flowers with over 6.5 inches of rainfall from December to February, awakening the seeds. After the rains, came 2 weeks of warm temperatures which set in motion the soaked seeds to break through the earth, reach for the sky and explode into a gathering of super blooms. Five years of drought have made these flowers eager to find the sunshine. Hence, a super bloom!

You can view the super blooms in your own local area. California poppies, with their bright orange blooms are hard to miss in neighborhood gardens, vacant lots and even off freeway ramps.

Our rolling hills in Irvine and Laguna Canyon that have been long-term brown, are now awash with green and dotted with colors. The Back Bay in Newport Beach has a swath of yellows from black mustard flowers to bush sunflower and other tiny pink, purple and white flowers covering the cliffs.

Look out for daisies, lupines, sages, lilies popping up everywhere. Even the humble dandelion, thistle and clover chastised as weeds are setting forth their yellow, purple and white flowers.

All of southern California is celebrating its bounty of blooms as wildflowers spring up in a variety of landscapes such as Antelope Valley, Death Valley, and Joshua Tree. Last year carpets of flowers blanketed Death Valley. But it’s Anza-Borrego’s turn, and a show of colors has been popping up across the 1,000 square miles in Anza-Borrego State Park.

IT’S TIME TO CHECK OUT THE WILDFLOWERS!

Google has even conveniently mapped out southern California wildflowers to visit.

Flowers: One of the best examples of native bunchgrass prairie habitats located in the state. Early bloomers include chocolate lilies, shooting stars and ground pinks, with poppies and lupines expected to bloom soon and later-blooming mariposa lilies.

Theodore Payne Foundation
April through May or longer

Flowers: Early in the season, the highest concentration of flowers is along the interior slopes, such as Coachwhip Trail and Weir Canyon Loop. They include California poppy, arroyo lupine, fiddleneck, Indian paintbrush, blue-eyed grass, California wishbone and bush sunflower.

Flowers: The preserve’s Monet’s Palette garden opened in 2016, planted in 22 varieties of native wildflowers that mimic the bands of color in the French Impressionism artist’s garden. Nearby Hummingbird Hill features penstemons, currants and other species that attract hummingbirds and butterflies. Poppies, woolly-leaved ceanothus are blooming now at the conservancy, with black and white sage later this month.