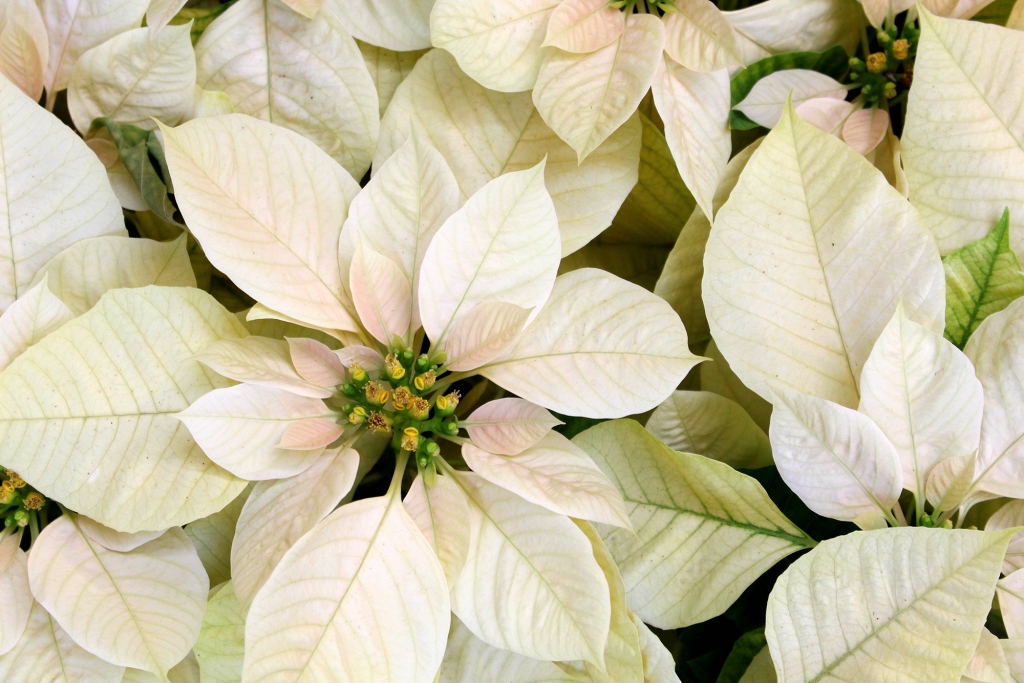 1. It’s beauty comes from its leaves. Poinsettia flowers are actually the small green or yellow center of the plant. The colorful petals that surround the center are actually the upper leaves of the plant called bracts.  There are over 100 varieties that come in pink, white, yellow, purple, salmon and multi-colors with names like Premium Picasso, Monet Twilight, Shimmer and Surprise. Prestige Red is one of the best selling hybrids.

2. Native to Mexico. Poinsettias are native to southern Mexico and Central America. They are sub-tropical plants and cannot tolerate winters colder than 50 degrees F. And prefer a daytime temperature between 65-70 degrees F.

3. Named after a former U.S. Amabassador. Dr. Joel R. Poinsett was a U.S. Ambassador to Mexico appointed by John Quincy Adams in the 1820’s. William Prescott both a historian and horticulturist named the Poinsettia in honor of Mr. Poinsett’s discovery.

4. Montezuma, the last Aztec king, appreciated the Poinsettia. He used caravans to bring Poinsettias to his high altitude city. They called the Poinsettias Cuetlaxochitl which translates as “flower that grows in residues .” They used the bracts to produce red dyes and the sap to control fevers. They considered the plant a symbol of purity.

5.   Legend has it was a Christmas miracle. Mexican legend says a penniless child wanted to offer a gift to Christ on Christmas Eve. He was told that a humble gift given in love is acceptable in God’s eyes. He picked some weeds on the side of the road and when he brought them into the church that eve, they bloomed into red and green flowers, a Christmas miracle.

6.  December 12th is Poinsettia Day. This day is celebrated to honor the passing of Joel R. Poinsettia, the plants namesake. It is also honored on that day in Mexico where Poinsettias are displayed in celebration of the Dia de la Virgen de Guadalupe – Day of the Virgin of Guadalupe. Today in Mexico and Guatemala it is known as Flor de Noche Buena meaning Christmas Eve Flower. In Chile and Peru, the plant is known as Crown of the Andes.

7.  Poinsettias are not poisonous. A 50 lb child would have to eat 500 leaves to have any harmful effects says a Ohio State University study. Plus the leaves have an awful taste. Those with latex allergies may have a skin reaction after touching the leaves. Pets might want to snack on it so best to keep away or they might suffer vomiting and diarrhea.

9. The beautiful color of the leaves come from darkness. The colors of the bracts need 12 hours at a time of darkness for at least five days in a row to change the color of the leaves. No bit of light can shine on it or it disrupts the process. Afterwards, the plants require lots of light during the day to give the bracts the brightest color.

10. No more pollen, no more colorful bracts. The plant looses its bracts and leaves soon after the tiny little flowers in the middle shed their pollen. For the longest-lasting Poinsettias, pick ones with little or no yellow pollen showing.