Plantscapers’ Case of the Missing Reuben (on Rye) 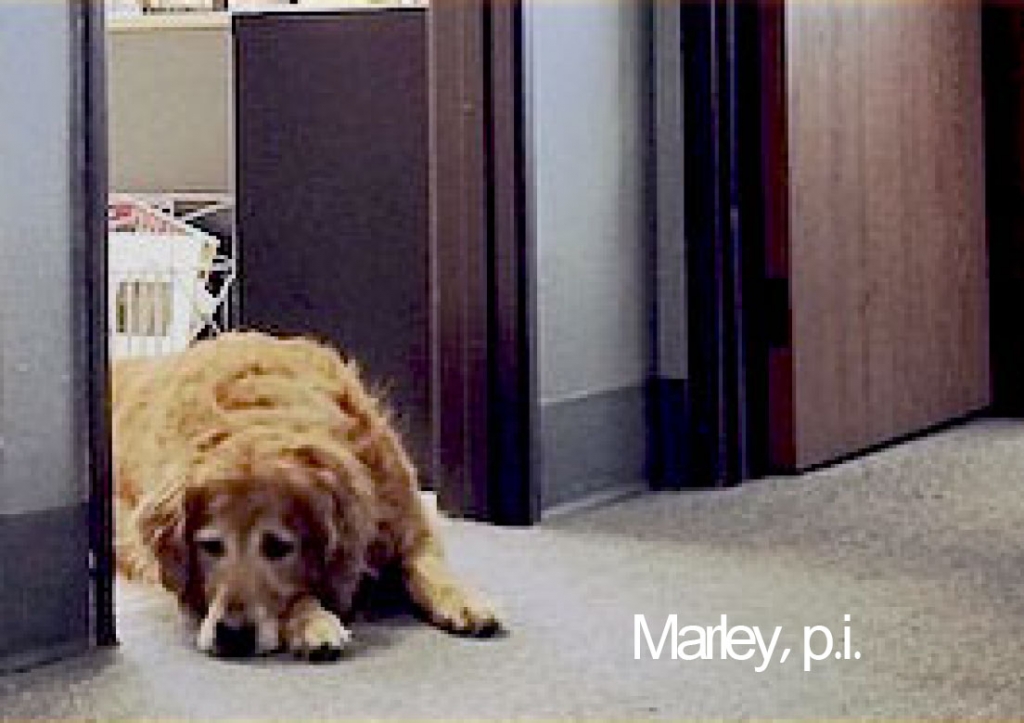 I admit it. I’m an old dog. Little greys poking around the edges. I gruff and ruff here and there and lie down a little more than I should. But that’s ok. I overheard on Oprah, people who are geniuses take naps all the time. I figure it’s the same for dogs. Here, say it, “Marle E. Farrow, Super Genius.” Has a nice ring to it, doesn’t it? Of course I’m no road runner, but I’m smarter than that coyote running around on TV.  After all, canines are the masters at napping and by golly our nose always knows and that includes Reuben sandwiches. But more on that later. 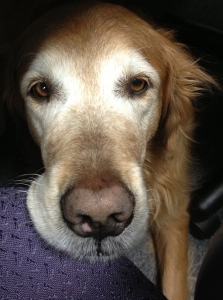 A Little About Me

My life’s been good. Regular, ya know. Predictable. I like it that way. Mornings I getup, stretch, run outside for quick bodily relief, come back inside, eat my food. Eat Dakarie’s food. And snag a bite or two from anything else hanging around unattended. It’s what I do. I mean, come on, I’m a dog. Anyway, I’m happy. Love my work. Love my family.

Did I tell you I just made VP Guard Dog at Plantscapers? Oh, yeah, I’m big time baby. Top Dog. I ride shotgun to work now, no backseat for me these days. Even have a driver. Ok, fine, yeah, she’s my boss and my master, but hey, she’s the one with her hands on the wheels. Me, I’m paw free, sitting nice with my nose out, window surfing, checking out the sights. What a rush, ya gotta try it sometime. Ooouuueeee hot dog, there’s nothing like it as you fly at nuclear speed, wind whipping past your snout, up your nose and through your fur.

You know, it wasn’t always this good. Things were a little rough at the job after the stock market crashed and the banks lost all their doggie cooki.., er, money. It was a bit of chaos everywhere. Masters were loosing their homes giving up their canine buddies to the pound. I still get the shivers thinking about it. Luckily my family didn’t have to move, kept the business rolling, so, yeah, I’m still around. But I’m telling you, there were a lot of streets in some cities hit hardest where dogs still don’t bark anymore. 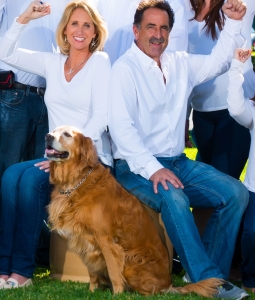 But today, Plantscapers continues to grow as a premier interior plantscaping service celebrating its 35 years in the industry, keeping our clients’ homes and businesses beautiful with plants. With the Grand Opening of their Palm Desert office coming up, things have gotten even busier along with the case of the missing sandwich that called for me, Marley Dog P.I., to put my nose in pose and sniff out the trouble. (Yeah, private investigation is just another part of my job description.)

I had just hopped out of the car at work and was winding my way through tall Kentia palms and Yucca Cane sitting in our shipment of new containers when I smelled something fishy going on. The warehouse was quiet except for some grunts from the crossfiters next door. I headed towards the back, cautious of what might be lurking among the plants and found remains of a late night snack sitting in a trashcan. Fish filet. Yep, the day was starting out right.

I continued to make my morning rounds, sniffing out the rest of the trashcans, and then headed towards a couple of employees for some feel-good head pats. After I plopped my body in the middle of the hallway – the acoustics off those walls are phenomenal – I gave in to a nap break. I woke up to some commotion and heard, “Blah, blah, blah, PASTRAMI, blah, blah, blah.” My ears perked up.

Ashley, our awesome administrative assistant, was talking on the phone and I walked into the front office to get a better take on things. It seems the Reuben sandwich that was just delivered, with 6 ounces of sliced pastrami drizzled with whole grain mustard topped with 3 slices of grilled Maui onions between 2 slices of thick, crusty rye bread, had gone missing. 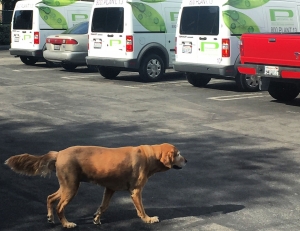 I immediately sniffed the place Ashley had pointed to while she was talking to Julie, our CEO and Founder, and smelled the mouth-watering scent of pastrami lingering on the desk. I gave the signal of four tail wags to let Julie know I was on it and padded out to the hallway, nose in the air, following the trail. I rounded into Susi’s room who was concentrating on her computer, designing great interiors with our fabulous plants. I looked around and saw a cobb salad sitting on her desk, but no pastrami.

I no time I was out the door and sailed into the next room where Tani’s brain was crunching numbers, her fast fingers flying away on the keyboard…she’s really smart. I nose up to her gently to catch a whiff or two and nothing. And even though she reached down to give me a nice back rub, I knew there was no time to waste. I headed off into the conference room hoping to find the missing sandwich.

Courtney our marketing director sat at the end of the conference table going over some artwork for our Palm Desert grand opening. She smiled at me and I innocently toured the table smelling for pastrami, but realized only a turkey sandwich, carrots and humus where there. She offered me some and as tempting as that was, I knew I had a job to do. 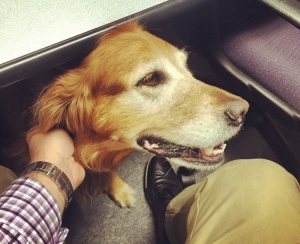 Then It Hits Me

As I left the room the smell hit me like a fast-thrown Frisbee at the beach. I turned immediately to the left and silently eased my way into our COO’s office. The scent was all over the room. I was close. I looked up, and as I did I saw it, the Reuben sitting in Mark’s hands. I knew I had him right where I wanted him. I sat down next to him, looked straight in his eyes, and barked. And the rest was history.

Yeah, I had found the sandwich and the case of the missing Reuben (on Rye) was solved. Though I’m a guard dog, it’s also my job to find missing things for Plantscapers and I take it very seriously. It’s what I do. I’m a dog. And I have to make sure any missing food finds its way to the only place I know it will be safe, which of course is in my belly. Until my next case, wOoF!