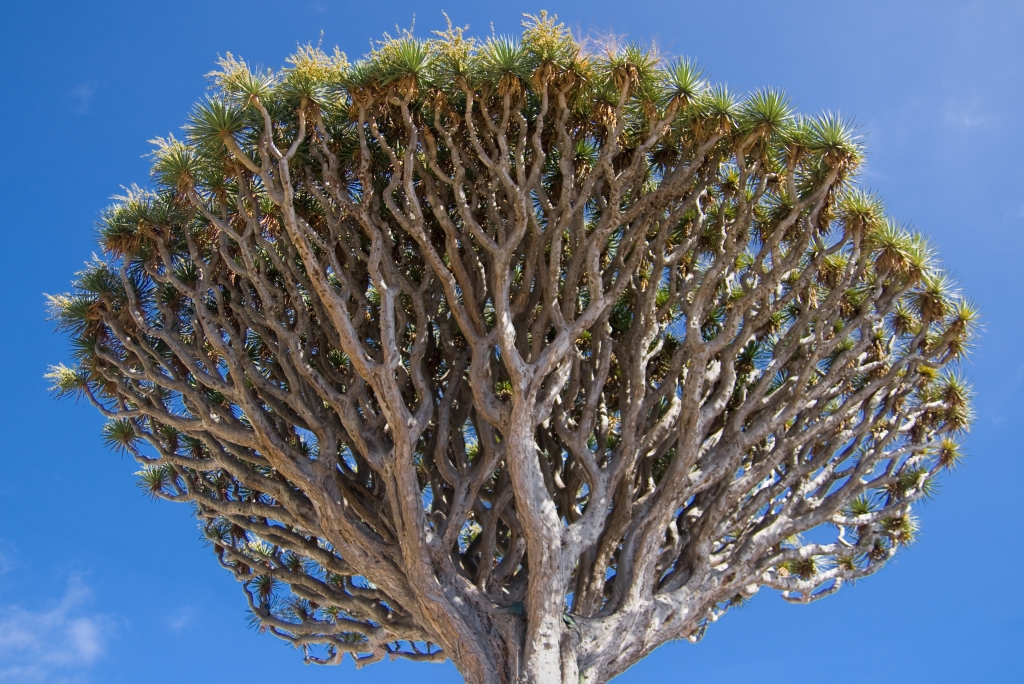 Dragon tree has its mythical start in the story of Hercules and his encounter with Ladon.

Ancient Greek legend has it that Ladon was a serpent-like dragon. He had a hundred heads and lived twisted around a tree in the Garden of the Hesperides guarding the golden apples. The dragon was sent by Hera Queen of Heaven to protect the sacred fruit that she had offered as gift to Zeus.

The strong, hot-headed Hercules was sent to engage in the dangerous and difficult tasks called the 12 Labors of Hercules. The 11th task called upon him to steal the apples of the Hesperides with the fierce dragon standing sentry. The mighty Hercules slayed the ferocious Ladon and the dragon’s blood flowed out over the land sprouting ‘dragon’ trees. Ladon was placed among the stars by the gods as the Constellation Draco. And the dragon trees, with their long, slender succulent trunks and prickly leaves, continue to bleed the death of Ladon with a reddish oozing sap whenever they get cut.

The physical shape of the dragon tree shows how such a legend might have sprung up from the imagination. The cluster of sword-like blue-green leaves that grows from multiple branches can be mistaken for a monster with a hundred heads. And the leaf scars on the trunks as the tree grows has the look and feel of a reptile’s skin.

There are over 120 species under the genus Dracaena. The most common species referred to as dragon trees are Dracaena cinnabari and Dracaena draco and grow in semi-desert areas. Planted outdoors they can grow to about 25 feet tall and almost as wide. The tallest ever recorded was over 70 feet tall. It is slow growing and starts with one stem and leaves.

The tree is mature between 10-15 years of age when a white lily-like perfumed flower spike emerges, followed by coral berries. A crown of terminal buds show up and this is when the plant starts branching. Each one grows for another 10-15 years and then re-branches soon to resemble an umbrella. The slow growth means it could take 10 years to reach about 4 feet in height.

A dragon tree makes a stunning garden specimen; or a dramatic piece that brings artistic flair to interior spaces. It grows well in full sun or part shade and requires well-drained soil, adapting well in containers and extreme outdoor weather such as heat, wind and salty marine weather. It is hardy to approximately 20-25 degrees F. Care is simple – water infrequently and deeply. The root zone must not remain constantly wet.

A Dragon Tree Can Get Really Old

Dracaena draco is native to the Canary Islands, Madeira, Cape Verde and western Morocco. And Dracaena cinnabari is native to Socotra archipelago located in the Arabian Sea. The wild dragon trees can be seen hanging off cliffs or high in the mountains.

The famous “El Drago Milenario” – Thousand Year Old Dragon – is located in Parque del Drago in Tenerife, the largest of the Canary Islands. The tree is reputed to be over a thousand years old, but is estimated to be between 250 – 365 years old and is one of the most important natural, cultural and historic symbols of the islands. Dragon trees are unfortunately facing a high risk of extinction in the wild due to loss of habitat, exploitation, competition and several other factors.